Read The Comeback NOW! Just $2.99 in the Kindle Store!

Shakey Silvers came back from the dead. He brought his bucket list.

Doug Kennedy is a stand-up comic struggling with his career, with his girlfriend, with the bottle. Desperate for money, he takes a gig at a remote casino located in “the exact-middle-of-nowhere,” Nevada. Doug thought that his act dying on stage was the worst he’d have to fear in the desert. He was dead wrong.

Doug was in for a hell of a ride.

Filled with eccentric characters, twists, and turns, and horrific situations, The Comeback is a fast-paced descent into a nightmare that won’t let you sleep.

Not convinced? Check out my page on PromoteHorror.com to read what others had to say or click the Amazon link at the top to read a few pages! You'll be meathooked by The Comeback! 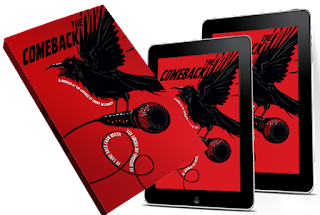 Posted by Larry McCarley at 9:30 AM